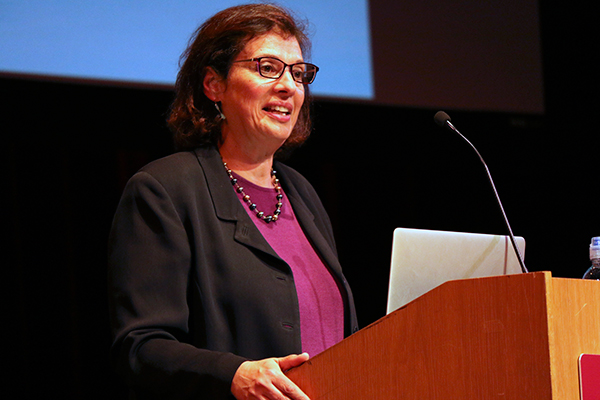 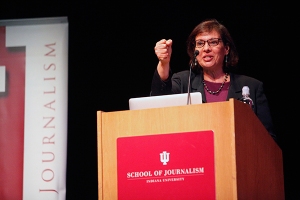 The Obama administration’s recent immigration reform has spurred an influx of political and legal debate on border security and deportation. What doesn’t get much airtime on the news, however, are the stories of the harsh conditions prompting migrants to flee in pursuit of safety and opportunity, and the families who have been torn apart in the process.

Pulitzer Prize-winning journalist Sonia Nazario has dedicated decades of her career to shedding light on what she calls underrepresented stories. She shared some of those stories, including those of immigrants, with her audience at the Buskirk-Chumley Theater Wednesday evening as a guest of the school’s Speaker Series.

“Immigrants are people who are willing to leave everything they know and love to go out into the complete unknown,” she said. “It’s important to show what is pushing people out of their countries.”

Nazario is author of the best-selling book Enrique’s Journey, which documents a Honduran boy’s dangerous trek to the U.S. in search of his mother. The book is an adaptation of a six-part series in the Los Angeles Times that won the 2003 Pulitzer Prize for feature writing.

Nazario said her own experience piqued her interest in both journalism and the idea of immigration. Her parents’ families came from Poland and Syria to Argentina, and her parents moved to Kansas, where Nazario was born. After her father’s death, the family moved back to Argentina.

At that time, Argentina’s “dirty war” was under way. Between 1976 and 1983, thousands of suspected left-wing dissidents were kidnapped and killed by the country’s military dictatorship. Nazario recalled how, as a young teen, she had seen blood on the streets near her home. Her mother told her this was the spot where journalists were killed “for reporting the truth.”

“It was really the first time, seeing that blood, that I understood the real power of words and the power of storytelling,” she said. “The lesson of that day never left me, and I became determined to tell stories that I hoped would matter in some sort of way.”

After graduating from Williams College, Nazario became the youngest reporter to be hired at the Wall Street Journal. She said she knew the only way to get people to care about social justice issues was to go in-depth, to tell the stories that moved readers on an emotional level.

“I became an expert on ‘fly-on-the-wall’ reporting, where you drop yourself in the middle of the action and watch the action as it’s unfolding,” she said. “My goal is to take you inside worlds that you might otherwise never see.” 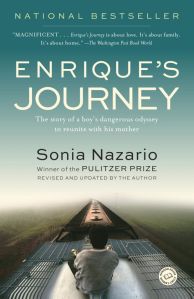 Her “immersive journalism” has results. By documenting the day-to-day life of a child with drug-addicted parents, her work changed childcare laws. People with anti-immigration views who have read Enrique’s Journey have told Nazario how the book changed their perceptions of immigrants.

Nazario said the idea for Enrique’s Journey grew from a conversation with her house cleaner, who confessed she had left four children in Guatemala to work in Los Angeles and send money home. She hadn’t seen her children in 12 years.

Nazario decided to investigate the desperation that makes women move thousands of miles away from their children.

“Women would tell me that they weren’t there to hear their own children’s first words or see their first steps,” she said. “But I learned that this was incredibly common.”

Through dozens of interviews, Nazario heard women cite their inability to feed their families in their home countries as a main reason to immigrate. And although working in the States allows mothers to send money and gifts home, the children grow up yearning for their mothers, she said. An increasing number leave Latin American and make the dangerous journey alone to find them.

Nazario wanted to tell this story through the eyes of one of these children. She used her network of contacts to connect with Enrique, then a 15-year-old Honduran who had made several attempts to cross the border already. She interviewed him and other children over a period of several weeks.

As part of her “fly-on-the-wall” reporting, Nazario knew she had to make the trip herself. She followed Enrique’s path from his home, then across Mexico, riding the tops of freight trains along with scores of other immigrants.

Although she faced the same potential dangers as the immigrants — injury, robbery or rape — she said it was only a small percentage of what the migrants had to suffer.

“I think if there’s an important story to tell that the public really needs to be informed about and could potentially lead to positive changes, I think it’s worth taking some risk,” she said.

She also was motivated by the animosity toward unlawful immigrants and the continuing national conversation about immigration. Nazario said she hoped to help the American public understand why migrants choose to leave everything behind.

Nazario said the government has not effectively responded to immigration issues, investing in superficial solutions instead of solving the root of the problem. For example, she said, billions of dollars in U.S. tax money has been invested in the construction and maintenance of border control and fencing, when the real issue is on the other side of the wall.

Nazario advocates a foreign policy that improves economic and democratic conditions in immigrants’ home countries so that citizens aren’t compelled to leave.

Nazario said Enrique’s story has opened the minds of many readers to the real issue of immigration. She said she hopes to continue changing people’s perceptions by telling the real experiences of the young and underrepresented, who are merely victims of poverty and are trying to find a way out.

“Doing this kind of storytelling is more important than ever before,” she said. “Who else is going to cut through the barrage of all this noise, and go beyond the superficial and unravel the big issues of our time?”

Nazario now is working on a book that looks at social justice issues in the United States through the experiences of women. No longer a reporter at the LA Times, she serves on the board of Honduras Good Works, a missionary supporting health and education in rural Honduras; Honduras Threads, an embroidery cooperative supporting Honduran women; and Kids in Need of Defense, a nonprofit started by Microsoft and Angelina Jolie to provide pro bono attorneys to immigrant children in court.