It’s hard to stroll the streets of Taiwan without seeing a few skinny dogs digging through the neighborhood dumpster.

But one family is trying to fix the problem, 800 dogs at a time.

Huang Xue and her family have a special love for dogs. They own a plot of land on the outskirts of Pingtung City and have turned it into a home for dogs that have been abused, abandoned or lost.

It started small with a few dogs brought home by Xue’s daughter, who couldn’t resist nursing them into better health. It has since escalated into hundreds after more strays were rescued from all over the city.

“Sometimes we get visitors who pretend they are interested in adopting, only to find what was probably their own dog at our doorstep the day after they left,” she said.

Huang Xue used to make a living running a drug store in the city. She and her family have since abandoned their old jobs to become dedicated to the dogs full-time since 2009. When asked why they have sacrificed so much for the dogs, they explain that it’s not just personal. It’s also religious.

They went to the local temple and asked the gods if their mission should be continued. They tossed divination blocks, a traditional Chinese religious ritual for seeking answers from the gods. The blocks answered “yes” all three times they were thrown, thus continuing the dog-saving enterprise.

The dogs at the shelters include imported breeds such as Labrador Retrievers, Golden
Retrievers and Huskies. Xue explained that this is the result of impulsive buying by the Taiwanese, people who lose interest once the puppies grow. 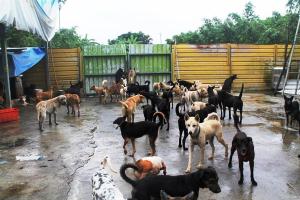 When there were only 200 dogs, the family managed to support them with their own finances. However, as the amount quadrupled, they now must rely on donations from the community. All 800 dogs are sterilized, vaccinated and only caged if threatened by other dogs.

Only in recent years has the government been increasing the subsidies in funding public shelters for the stray. Even then, the captured strays are euthanized within a week if not adopted due to the lack of shelter space.

According to Hwei Lien, an animal shelter worker in Pingtung City, there was a trend of owning Labradors after the release of Japanese movie “Life of Quill, the Seeing Eye-Dog”. Now, a new trend shows everybody getting little dogs, such as Poodles and Pomeranians, so they abandon the old, larger-sized dogs.

Thanks to the Huang family, these abandoned dogs — who would only starve and suffer terrible skin diseases in the humidity and heat of Taiwan — have found a place to call home. Although running the shelter is strenuous, even with help from her daughter and two sons, Xue truly loves the dogs and does not plan on stopping.