If you thought Lady Gaga was cooky, Yayoi Kusama is one that has always pushed the boundaries of “weird.”

Classically trained in traditional Japanese painting, Kusama has since broke away from anything conventional and became one of the most influential modern artists in the world.

Her impact to the art world began in the 70s, when she decided to move to New York City.

Her unique use of polkadots in 2-dimentional, sculpture, and environmental art might’ve derived from the fact that she experiences psychiatric problems and hallucinations, so much so that she checked herself into a hospital more than three decades ago. She continues to create pieces consistently, working a stable 9-5 schedule everyday producing the work that continues to be exhibited all over the world.

But famous exhibits in an overcrowded city like Shanghai means one thing: lines, lines, and lines. Not knowing anything about the content of the exhibit, I had thought that the line outside the Museum of Contemporary Art was all. Was I wrong.

As I walked in, I realized the whole crowd within the museum were all people waiting in line for her individual environmental pieces. At a Friday afternoon, the average wait for the pieces I had come to see had become 30-40 minutes each, with only less than a minute allowed to experience it in order to keep the lines moving.

Her most breathtaking work, the “Infinity Mirrored Room,” only allowed visitors 15 seconds to experience it. I barely had time to blink before we were escorted out. This is not exactly how I wanted to experience her art, but the overcrowded-ness came with one unique advantage:

Out of all the art museums I’ve been to in the world, I’ve never been in one that made a point to prohibit visitors from taking photos, yet did absolutely nothing to enforce the rule. Every room was staffed with several museum employees, yet they either did nothing or merely whispered to people who took photos, which were just about everyone in the building. There were so many people there, they simply didn’t see the point in trying to control it.

With Kusama’s colorful, abstract sculptures, I will admit the lack of regulation made the museum become an artistic photographer’s heaven. I think I exhausted my camera experimenting with Kusama’s sculptures and illuminated pieces.

As I waited in line, I had plenty of time to people watch. With the “Obliteration Room” being an interactive piece that gave visitors the power to polkadot the room, people began to get creative with the dots and become a part of the artwork. 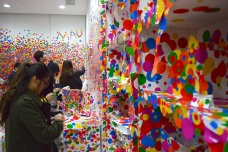 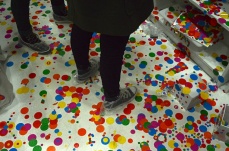 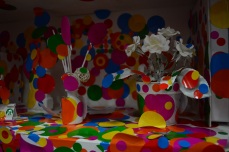 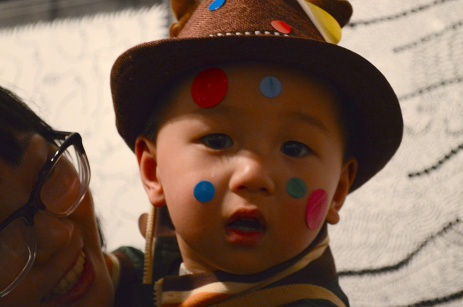 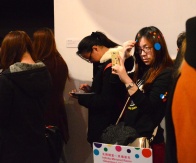 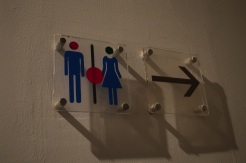 Although Kusama’s work is definitely not meant to be shared amidst such overcrowded-ness, I would still say the overall experience was worth it. Despite the short time in the Infinity Mirrored Room, it was absolutely beautiful. The roof of the MoCA also had Kusama’s outdoor environmental piece accompanied by a kick ass view of the city Just make sure to try to hit the MoCA early in the day on weekdays, bring plenty of entertainment and good friends. 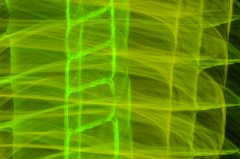 Kusama’s illuminated pieces made for some fun times with long exposure.

The view from MoCA’s roof, accompanied with Kusama’s outdoor piece. 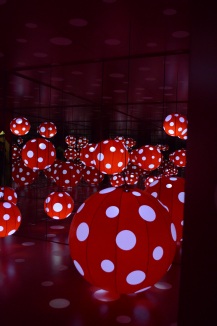 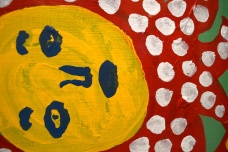