Despite the modernization, which seemed to have hit the nation with blunt-force trauma, Chinese culture is traditional. The people are conservative, life is conventional, and sexism is unfortunately still a prominent part of family culture. But when globalization and westernization forces itself into a traditional society, some interesting scenes appear on these streets.

Being in the urban area that we are, Shanghai is abundant with malls, Starbucks, McDonalds, and all things American. Some areas even resembled the streets of New York City, if you just ignore the old Chinese men pedaling around in their loaded rusty tricycles and the street vendors selling scallion pancakes and duck intestines.

After visiting the Yu Garden (豫园), a tourist attraction that didn’t actually have any sort of vegetation despite its name’s implications, I got to see a part of the city that actually attempts to sustain the Chinese traditional scenery, while appeasing western tourists and the youth of China. What resulted were some intense clashing of old heritage and the new age.

Even within the Yu Garden, which I would assume is structured like old streets for the purpose of a throwback vibe,  there was a Starbucks, Dairy Queen, McDonalds, and KFC on every corner. The shops selling calligraphy paintings and Cheongsams were intertwined with these chain fried chicken and ice cream shops,  spicing up the vintage ambiance with bright and familiar LED signs.

I don’t know about you, but the last thing I want when I’m visiting somewhere for a traditional taste of China is a Big Mac.

A McDonalds delivery man unlocks his rusty, taped-up scooter for his next route.

I don’t know what this is, but the shirt says “China.” 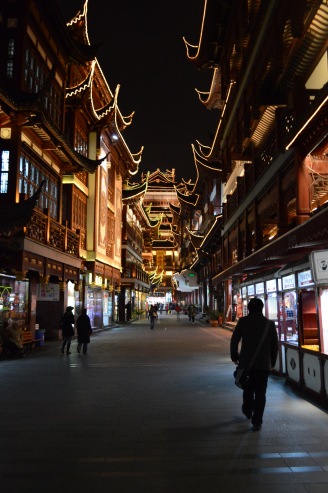 The streets of Yu Garden, which are surprisingly empty due to it being off-season for tourists. 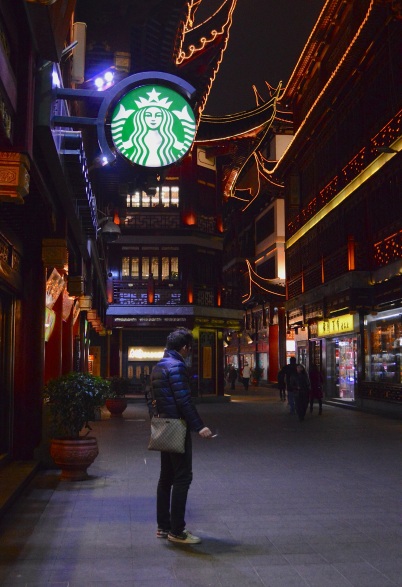 A Chinese man smokes a cigarette outside of Starbucks in Yu Garden. 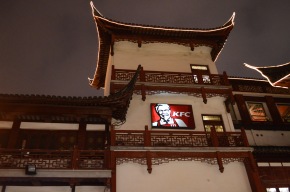 A couple takes a selfie on their iPhone in front of Dairy Queen at Yu Garden.

All shops were open despite the lack of tourists.